BUDDY
This is Buddy when he was rescued in Oct. He was in a potentially dangerous situation, so Sandra, one of our team, had to move quickly. When she arrived she found that there was another kitten, that she trapped, and their mother also went into the trap. Mom was spayed and returned 3 days later. Buddy was near death when he came in and he was brought to Raheny Vets who warned that he might not make it. They gave him medication. Sandra nursed him for three weeks with antibiotics, decongestants and even a nebuliser.

And here is Buddy now, completely recovered and happy with his brother Billy in his new home. So, a triple win, instead of a single one.

ALBERT
Albert came in to us in Oct. in very poor condition. He had a lice infestation, he was anaemic, had an upset tummy and needed fluids and ongoing medical and dental care. We appealed for funds for Albert’s treatment and many of you responded very generously—thank you.

Trap, Neuter, Return is central to Cats’ Aid’s work. We are often asked to help with colonies of feral cats and with strays in peoples’ gardens. The photo above shows just one example.

One of our vets gave our contact details to a girl who needed help with 8 cats. She was willing to pay for neutering, which is very rare—so many people expect rescue groups to pay for everything. Neutering this number of cats costs approx. €600, which is why we appreciate donations. We also appreciate an Ex Gratia payment from the Dept. of Agriculture, Food and the Marine for our TNR programme.

This particular case involved 12 visits with traps, (early morning and late evening) and driving to and from the vets before all the cats were neutered and vet-checked. The cats have been returned to their base. They will be monitored and fed by an elderly lady who is willing to do this in spite of needing lifts to the location.

8 cats now secure –this shows what can be done when people are willing to help. 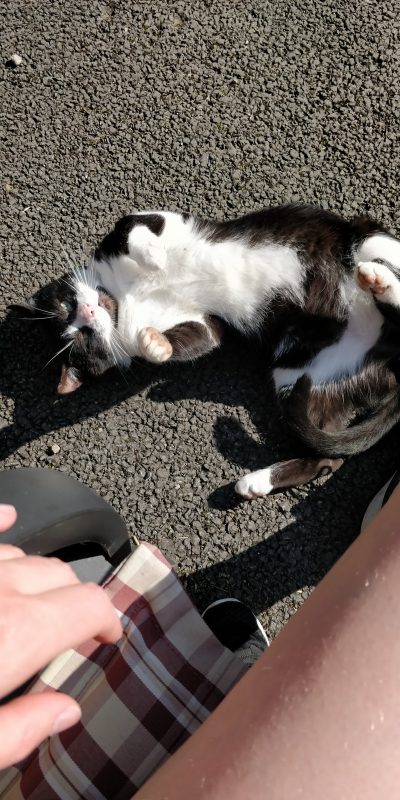 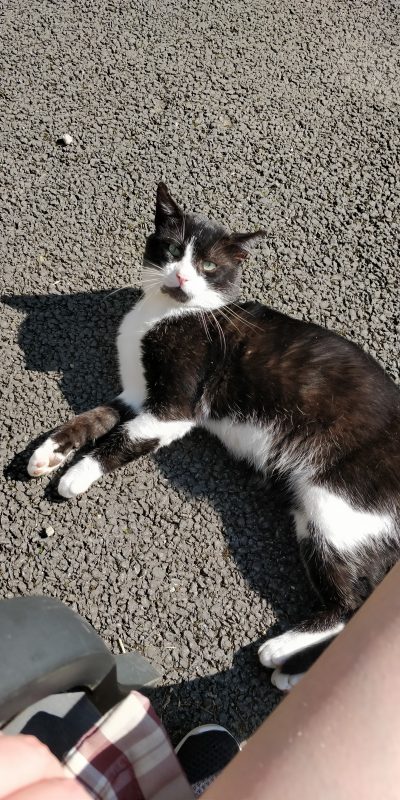 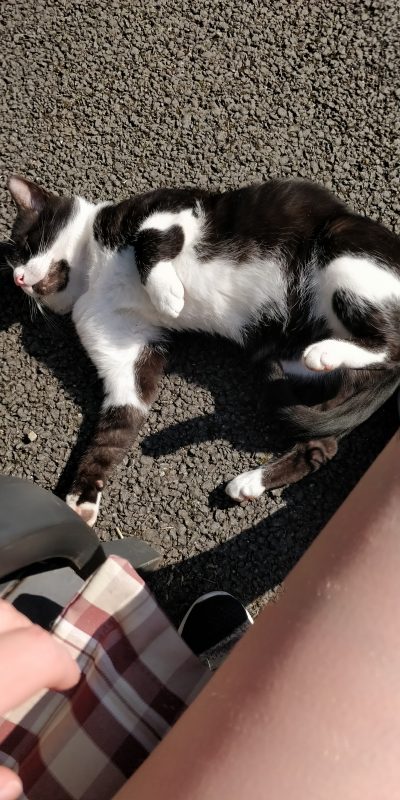 We found this fella in the Strawberry Beds. He’s not micro-chipped. He’s being hanging around for a couple of months but recently has become more friendly and approachable. He is constantly trying to get into the house so it seems that he was an indoor cat at some point. 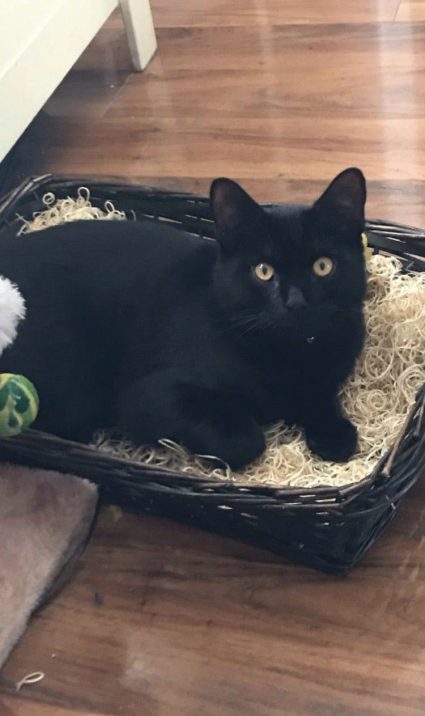 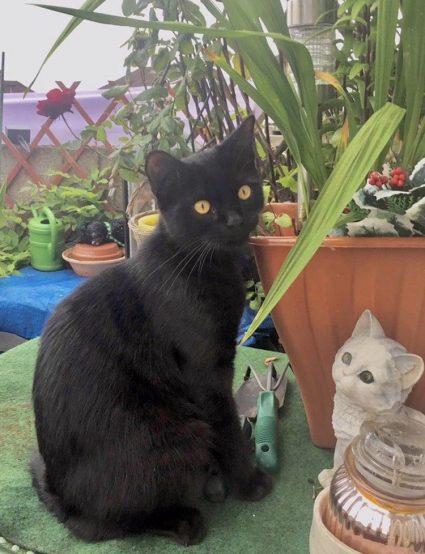 Ted Is Missing from Baldoyle since June 15th(FOUND)

Our cat Ted who is ginger and white colouring wearing blue collar with bell and tag with contact details is missing since Saturday 15th of June from Stapolin Lawns in Baldoyle. He is 18 months old.  Missed terribly. Reward if found. He is micro chipped and neutered. If anybody has any information please phone  086 6016510 or 0872492552 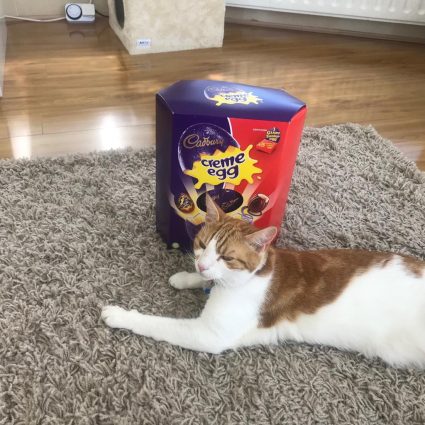 An update from Ann Baker

It’s a while since I shared the kitties’ adventures…

Throughout the warm Summer Lottie had a great time exploring the area, every road on our estate knows her, and every open back door was entered with her nosing around and getting the feel of the home. Thankfully she came home each evening; I would have felt very hurt if she didn’t. She has a wanderlust and demands to be let out each morning We have developed a sneaky trap to keep her in when she ventures home. If she sees us she gives us the run around and puts that bushy tail into the air and runs away, so her Daddy, Fred, cut one of my coasters in two, and we lodge it in the cat flap so she can enter but not leave. Sneaky I know, but at least I am more comfortable knowing she can find safety when I am not around.

Our Granddaughter is now walking, or should I say running, around and both the little ladies take a look and move to safer ground where the tails are safe. I think she has plans for Lottie’s tail, Minion’s one is a bit lacking in size and width, but even that one is kept clear of little hands. Catherine is not afraid of them at all, but I would not like to risk a paw or claw being used to defend so the distance is a great idea on behalf of the kitties.

(We endorse and emphasise the vital importance of careful supervision of children with animals.—ED.)

Minion is still a stay at home girl; she has stopped going up the wall and is very content to sit out and enjoy watching me work in the garden. At the moment both ladies are fascinated by the new bulbs being planted. Fred planted a load in the beds last week, the two ladies watched and the moment his back was turned they dug them up and played a type of snooker with them… I thought it was funny, but Daddy was annoyed and had to bury them again.  They both found nice shady areas  to cool down before they planned their next moves. Lottie was very naughty and brought in a lot of poor deceased birds. Much as I like a gift, I was not very pleased with this form, I have a bird cemetery now in the flower bed covered with rocks; they only tried to dig up the poor souls so I had to make sure there were tomb stones over each little grave.

As usual, my stairs were used as back scratchers for the resident ladies, I spent most of my time cleaning them, the next day it would be covered with hair again!! The beds are the favourite place these evenings, nice and warm and I have to be careful as Lottie is very fond of my patchwork quilt and is known to tunnel in under it and was nearly sat on a few times as she seems to be able to flatten herself out. Only we know she can be there I think she might be permanently flattened otherwise.  She was amazed at Blondie, the lizard last week as she was shedding her skin, there was a perfect lizard shape left and she was wondering where the other one had come from. She still watches the little wind dance and nearly managed to make an entry into the tank; the sliding door was open a bit and I caught her slipping her paw in to try to open it more. I hate to think what she would have done if she had managed it but maybe Blondie would be cute enough to hide behind the stones or something. They still have staring competitions with Blondie nearly always winning when she sticks her tongue out at her… the odd time she turns away as if bored with it all and shows her tail to Lottie which seems to amuse her.

Take care, and love to all the little kitties in your care, Ann 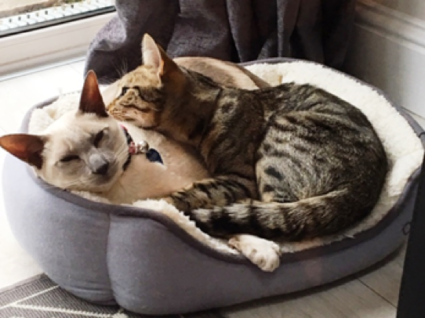 Noodles was born to a beautiful all black cat who had been living outside, heavily pregnant, just before the big snow last March. The kind woman who found her got her to Cats’ Aid.

As Noodles was the only tabby in the litter of five beautiful kittens he stood out a mile. He was always a little character; he was the last of the litter to get a forever home but as he loved his mammy that suited him down to the ground. He and all his siblings were a dream litter to look after and they all matured into lovely placid kittens that adored all human interaction. The entire litter were very sociable, helped without a doubt by my neighbours and their small children who used to drop by to play with them regularly.

We were absolutely delighted that he landed on his four paws in a super home with Suzie and Fiadh and their cat, Funny.

My kitten is called Noodles and he is almost 8 months old.   He is a tabby.  In June we got him from a lady called Sue from Cats’ Aid.   He likes to play a lot and is a bit crazy.    He always steals my Lego pieces and takes my dolls’ clothes.  Sometimes he tries to help me do my homework.   He is best friends with our other cat Funny who is 8 years old and a Lilac Point Siamese, who is also a rescue cat.

In October I took Noodles to the SABCCI and GCCFI cat show in Knocklyon.   He hissed a lot at the judges because he was a little scared but still managed to win lots of prizes – 8 rosettes in all!  At the show I was able to see lots of different breeds of cats and buy some cat toys for Noodles and Funny.    Noodles was very tired when I brought him home but he was happy to have a big sleep with Funny.

I hope Noodles will live a long and happy life with me because he makes me smile every day! 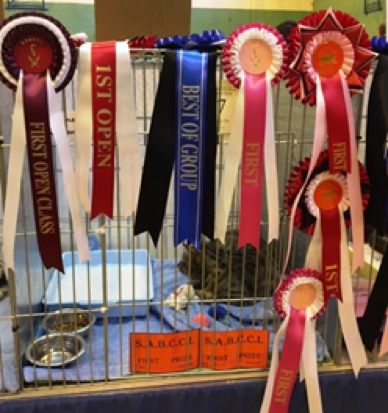 We unfortunately need to find a new home for our cats as our new landlord won’t allow pets. We are heartbroken but have no choice.

They are 2 sibling cats, a white male called Ghost and ginger female called Mimosa, they are 8 years old.
Both are vaccinated, neutered and chipped. They are happy indoors and outdoors and are very passive towards children and other animals.
They have always been together and get along fine but don’t play together like they used to so would be okay in different homes.
They would need to be kept in the new home for about 8 weeks to bond with the new owner and the home and not get lost if let out too soon. A home check will apply.
Please call Julia if you can give them a forever home: 086 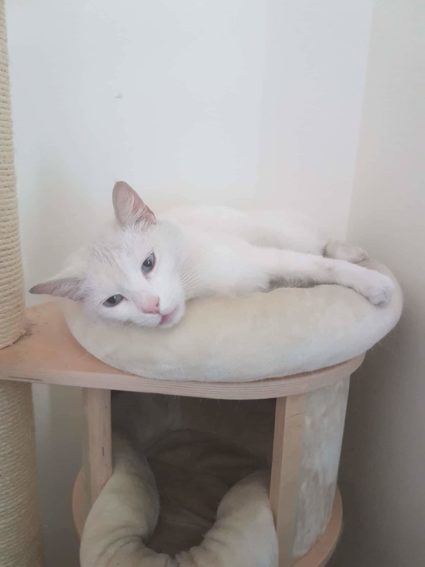 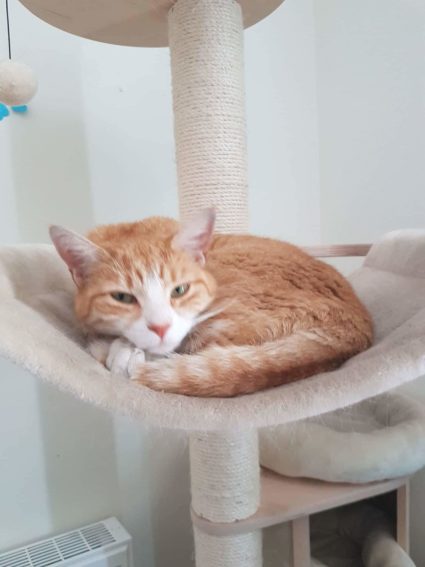